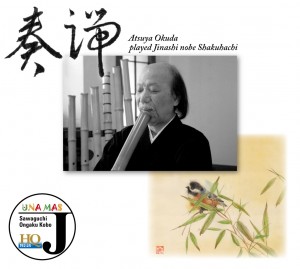 1. Koten Suzuru ……………….Being also named“ Godan Suzuru”, referring to the episode in Sukago Innenkyo about cranes cutting their body for the sake for growing their babies, this piece was said to express the behavior of self-sacrificing parents.

2. Honte no Shirabe ………… Tune to practice for long period of time. It reminds the players of the challenging subject of

breathing. Other similar equivalents include the traditional piece in Fudaiji Temple of Mt. Rintaku in Hamamatsu and the

3. Nerisaji………………………..Legendarily this set of tunes was originally composed by Shinhichi Maki who was a samurai of

Kuroda domain and belonged to Hakata Icchoken school in Kyushu. Three pieces survived to date that are“ Bousaji”“, Yurisaji” and“ Nerisaji”. Saji means the Mercy of Bodhisattva that represents the spirit of Mahayana. Among“ Shin”,“ Gyou” and“ Sou” in Saji,“ Sou” is the most extraordinary and complex composition through repeated tempering and polishing (=“neri”), and that is why it is called Nerisaji.

4. Kyorei ………………………… The title means imaginery [=kyo] bell [=rei] and is sometimes referred as imaginery spirit. The most classical piece among the works of Fukeshu budhism sect.

5. Kudariha-Kaede ………….. Traditionally inherited in Kyushu area with two versions of Honte and Kaede. This recording is the piece for Kaede.

6. Sokkan……………………….. The wind blows toward decaying bamboos in thicket. The sense of this desolateness overlaps to the state of the spirit with this tune. We overview the world through the breath, the wind, and the bamboo.

7. Sanya…………………………. One of theories explains that this term originally meant mendicancy.

8. Betsuden, Shika no Tone… The tune extends itself as inspired by the sound of deer that reside in distant mountains and by their behavior of running around. A challenging piece of music to play with the register as wide as 4 octaves.

9. Shinya …………………………Prevailing quietness in the midnight transitions to bright enlightment in the dawn.

On the Production of“ So-Zen” Album

One finds something essential with Japanese traditional instruments, and it is“ sawari”“. Sawari” is the intimacy to the nature as compared to the voices of cicadas in the sense that their tunes are heavily complex almost like a noise but they blend well with variety of natural sounds. Other tunes of “sawari” are, for example, a clear click of a wind-bell or a profound bell of temples that brings us the sense of beauty and emptiness of life as well.

The fascinating character of“ Hocchiku” instrument, Jinashi-nobe Shakuhachi by definition, used in this recording is its deep softness featuring“ sawari”. Two-piece, Jiari Shakuhachi that is most commonly popular today is the result of pursuing the sound pitch and volume suited for ensembles at the sacrifice of tones.

The natural form of Hocchiku is rich with“ sawari” bringing the tone of distance that we Japanese continued to be particular with. The slower rise of notes and extremely fine, subtle sounds are interestingly quite audible. Inverse proportional to the sound volume, the taste and profoundness of its tones are even more vivid.

Born in 1945, Atsuya Okuda was active as jazz trumpet player for 20 years since 1965, and thereafter has he studied“ hocchiku”, an authentic Japanese bamboo flute, with the inspiration of its infinite potential in forming his original world of music.

In 1985, he set up Zen-Sabo in Kokubunji, Tokyo as the foundation of teaching“ hocchiku” as wellas focal training of himself, and started workshop activities and tours to such countries as Switzerland, Austria, England, Canada, USA and Finland since 2003. He has received many foreign country students who aspire to master hocchiku at Zen-Sabo.

The instrument is plainly natural like a bare bone bamboo tree, and in order to play it, not only the high level of skills but also the spirit to resonate only with essentials among excesses are required, similar to Zen’s spirit. Okuda is the single only player of Hocchiku inheriting the spirituality of Watazumi Doso who died in 1992. His CD album“ Sound of Zen” released in 2002 was a participating work in Japan Arts Festival by Agency for Cultural Affairs.

Okuda had ceased his recordings because the sound quality did not meet his expectations, but the concept of“ Surround Scape” promoted by Mick Sawaguchi convinced him with its totally new aspect of presentation as well as its sound quality. Hence, this collaboration resulted.

As attributed as the most natural form of instrument, Hocchiku is gifted with the tone of distance that we Japanese continued to be traditionally particular with. Interestingly, the slower rise of notes and extremely fine, subtle sounds are rather powerful to be heard. I was fully delighted and astonished to have triggered mutual stimulations and realized the “tone of distance” in collaborating my Hocchiku with Mick Sawaguchi who works for Producer & engineer on it promotes as the new technological format of artistic expression.

In this recording, we captured “Hocchiku” in surround with 192kHz/24 bit .Finally it was mix down with surround scape as 96KHz-24bit resolution as release format. This instrument is the original form of Shakuhachi, dened as Jinashi-nobekan, with no additional treatment of inner pipe surface for ne pitch-tuning. The sound that Atsuya Okuda generates at some times was almost indicational, and the dynamic range of its air burst was hugely broad particularly when he concealed his breath, therefore the subject was a tough challenge for the recording engineer. The highest priority was focused to realize the ultimate environment for playing in the studio room, and we asked Nittobo prepare a modied version of AGS the day before that managed to equalize the wave motion. The rest was the equipment as usual, and the following microphones of Microtech and Royer’s ribbon were chosen for the main, and CO-100K for surround that went in to Pyramix DAW. Please see the line-up below for your reference.