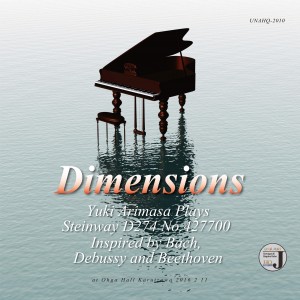 I have never heard such a sound from recorded media that realizes the image of piano itself almost visible. It is as if the listening touches the instrument through the ears. What makes the sound so real? One of factors I perceive is the purity without least residues in the notes that builds up the form of instrument. Particularly noticeable is the beauty in the extremely fine and subtle decay of envelopes.

The piano played here is Steinway Hamburg D274 model, and its serial number #427700 implies that the instrument came with Arturo Benedetti Michelangeli when he visited Japan. As he went back home before his scheduled final concert, the artist being infamous for such behaviors, the inviter-agent kept hold of his instrument instead and then later offered it to Ohga Hall through some kind of relationship. The pitch is tuned at 440Hz “classically” in the recording as Yuki Arimasa specified.

The music here, the collection of ballades, is actually all derived from well-known themes of classical music, and Yuki Arimasa expands his improvisation as we enjoy the progress crossing the border of classical and jazz music.

Track 1 is from one of the most popular cantatas of J. S. Bach, No. 147 “Herz und Mund und Tat und Leben”, in which the string ensemble ripples the melodic passage along the choral “Jesus bleibet meine Freude”.

Track 5 is “Homage à Rameau”, one of three pieces in Debussy’s “Image 1”. Debussy was very much into the methodology of classical and baroque compositions in this period of time. As an implication for it, some of his works were actually titled “Prelude” or “Sarabande”, and Rameau, the French major in 17th century, seemed his particular favor. I tend to find this piece is the core of this album, and Yuki showed much concentration in it as his homage to Debussy. 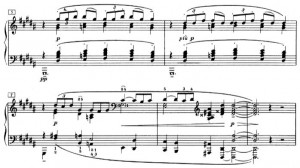 Back to the earlier topic of sound purity, Mick confessed, “it may be perhaps due to the benefit of batteries”. In Ohga Hall in Karuizawa where the recording took place, the entire electric energy was supplied from a couple of portable battery products “Power Yiile Plus” that were brought in specifically for this session. The product is nominally for home use in the emergency power-down occasions or for shifting peak consumption time, while it can sufficiently serve 7-8 hours of the recording session like this. If one would use the same solution in the playing at home, the result might be even more astounding! One more factor to note in addition would be the perfectionistic treatment of all kinds of vibrations around the stage even for each contact of cables and plugs that is now the style of UNAMAS recording sessions.

I listened to this recording first in the 9.1 mix that set a standard in my brain and ears. At a later time, I listened to the 5ch mix (equivalent to the release version) at home. The difference between the two was less of auditorium reverberation in the 5ch resulting a simpler situation acoustically that enhances your facing with the instrument more directly. As you shift your listening environment from high-res, pure 2 channel to 5 channel with surround, and from 5 to even higher 9, the sensational factor in sound listening changes from typical “sound quality” horizon to something else. I characterize it as “the presence of sound or instrument” that consists of the relationship between direct sound and indirect sound. When you hear indirect sound exactly from the same point as direct sound, it won’t stimulate your perception of the realistic instrument. With the 5ch mix, even if the amount of indirect elements stays in the same level overall, their localization spreads in a more spacious field dimensionally which may contribute in realizing the presence from the sound of instrument, and then the 5ch mix would tend to appear smoother and silkier. The recording here places the piano only a few meters away in front of you to capture very precisely and vividly the solid Steinway highs as well as the lows in the deep. In addition, the acoustics does not fail to illustrate the event is taking place in a much larger concert hall space which is subtle yet appreciable.

Mick’s intent here is to establish a stage for listener to relate himself or herself with the instrument beyond simply reproducing the concert hall acoustics, and doing so he managed to offer an ideal listening condition for us. The perception of space and soundstage that I mentioned here may differ depending on each individual playback environment, but the quality will be enjoyed everywhere as its common feature.