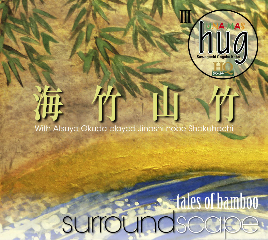 Atsuya Okuda
Born in 1945, Atsuya Okuda was active as jazz trumpet player for 20 years since 1965, and thereafter has he studied“ hocchiku”, an authentic Japanese bamboo flute, with the inspiration of its infinite potential in forming his original world of music.
In 1985, he set up Zen-Sabo in Kokubunji, Tokyo as the foundation of teaching“ hocchiku” as wellas focal training of himself, and started workshop activities and tours to such countries as Switzerland, Austria, England, Canada, USA and Finland since 2003. He has received many foreign country students who aspire to master hocchiku at Zen-Sabo.
The instrument is plainly natural like a bare bone bamboo tree, and in order to play it, not only the high level of skills but also the spirit to resonate only with essentials among excesses are required, similar to Zen’s spirit. Okuda is the single only player of Hocchiku inheriting the spirituality of Watazumi Doso who died in 1992. His CD album“ Sound of Zen” released in 2002 was a participating work in Japan Arts Festival by Agency for Cultural Affairs.
Okuda had ceased his recordings because the sound quality did not meet his expectations, but the concept of“ Surround Scape” promoted by Mick Sawaguchi convinced him with its totally new aspect of presentation as well as its sound quality. Hence, this collaboration resulted.

Comment from Atsuya Okuda
As attributed as the most natural form of instrument, Hocchiku is gifted with the tone of distance that we Japanese continued to be traditionally particular with. Interestingly, the slower rise of notes and extremely fine, subtle sounds are rather powerful to be heard. I was fully delighted and astonished to have triggered mutual stimulations and realized the “tone of distance” in collaborating my Hocchiku with Mick Sawaguchi who works for Producer & engineer on it promotes as the new technological format of artistic expression.

Mick Sawaguchi, UNAMAS HUG
In this recording, we captured “Hocchiku” in surround with 192kHz/24 bit .Finally it was mix down with surround scape as 96KHz-24bit resolution as release format. This instrument is the original form of Shakuhachi, dened as Jinashi-nobekan, with no additional treatment of inner pipe surface for ne pitch-tuning. The sound that Atsuya Okuda generates at some times was almost indicational, and the dynamic range of its air burst was hugely broad particularly when he concealed his breath, therefore the subject was a tough challenge for the recording engineer. The highest priority was focused to realize the ultimate environment for playing in the studio room, and we asked Nittobo prepare a modied version of AGS the day before that managed to equalize the wave motion. The rest was the equipment as usual, and the following microphones of Microtech and Royer’s ribbon were chosen for the main, and CO-100K for surround that went in to Pyramix DAW. Please see the line-up below for your reference.
Microphone Microtech Gefell UM-900 Royer R-122, Sanken CO-100K
Mic Pre-amp SSL 9000j
Audio Interface RME Fireface UC
DAW PYRAMIX Native+MacBook Pro
Power-supply Isolation Soundnite
Studio Acoustic Treatment Nittobo AGS Sound Diffusing Absorber